MultiChoice wins big at the SAFTAs 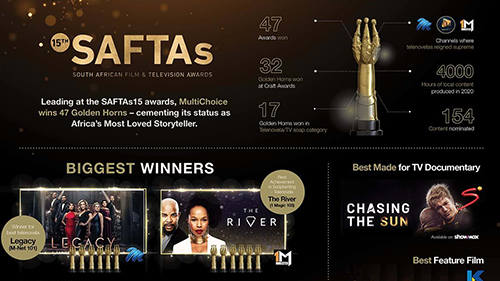 Mzansi Magic's Gomora walked away with a golden horn for the Most Popular TV Show/Telenovela as voted by the public. Gomora highlights the inequalities between the rich and the poor and how fine the line between the two can be and stars SAFTA winner Katlego Danke, Connie Chiume and Ama Qamata.

"All the Golden Horns received by our storytellers demonstrate the breadth, depth and diversity of MultiChoice's content across its various platforms. A win for MultiChoice is a win for the local TV and film industry that we continue to unceasingly invest in. We are hugely proud that programming from our flagship channels M-Net, kykNET, 1Magic and Mzansi Magic has been recognised and are celebrating the fact that ShowMax Originals are also some of the most loved shows," says Yolisa Phahle, MultiChoice Group CEO of General Entertainment and Connected Video.

Last year around 4 000 hours of local content was produced by the group in multiple languages and across many different countries.

"This awards ceremony is dedicated to the talent and production teams who continue to excel despite the immense pressure our industry endured this past year, as we battle the pandemic. Thank you to the hearts and minds that contribute to our industry's growth and society at large," concludes Phahle.

Menzi Ngubane is The King of Storytelling

The late Menzi Ngubane's final on-screen performance earned him a SAFTA for Best Actor – Telenovela for his depiction of villainous Judas Ngwenya in Isibaya, which ended its eighth and final season earlier this year. Gomora Season 1 received the Best Achievement in Directing – Telenovela.

M-Net's Legacy (DStv channel 101), which premiered in September last year, was crowned the Best Telenovela at its SAFTA debut, while award-winning veteran actress Michelle Botes (Angelique Price on Legacy) won her first SAFTA as the Best Supporting Actress – Telenovela. Other M-Net wins on the night include:

Catch Legacy on M-Net (DStv channel 101), Monday – Thursday, 7PM, and binge all the episodes on Showmax.

kykNET's (DStv channel 144) stars also had a good night: Clint Brink won Best Actor - TV Soap in a stellar performance as Steve Abrahams in Binnelanders.  Gerrit Schoonhoven who passed away earlier this year was one of the directing team that won Best Directing - TV Soap for the medical series in its 15th season. James Borthwick was named Best Actor - TV Comedy for the second time as Ferdie in kykNET's Hotel, which also earned Martelize Kolver Best Supporting Actress as Brenda. June van Merch also won her first SAFTA for Best Supporting Actor - TV Drama in the title role in Sara Se Geheim. Other wins are:

Watch Binnerlanders on kykNET's (DStv Channel 144), Monday - Friday, 7:30PM and binge all the episodes on Showmax.

The River Does It Again

Watch The River on 1Magic (DStv channel 103), Monday - Friday, 8PM and binge all the episodes on Showmax.


Back to previous page